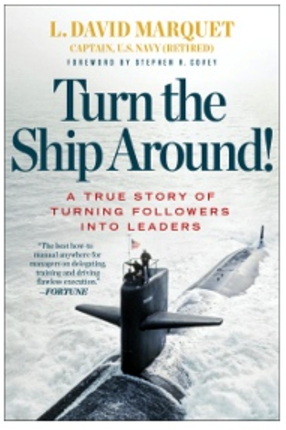 Book Review – Turn the Ship Around

By Jennifer Taylor In Business, Info Worth Sharing 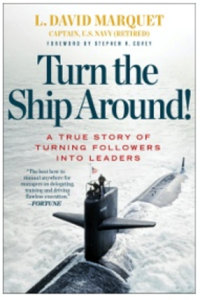 David Marquet was an experienced Navy Officer who graduated at the top of his class from the US Naval Academy.  He was tasked with leading the worst-performing submarine in the entire fleet: the $2 billion, nuclear-powered Santa Fe.  He found himself in a high-stress environment with no room for error and 134 people looking to him for his knowledge, wisdom, experience, and expertise.  So, what did he do?  He vowed to never give another order.  And it worked.

Marquet, like most traditional military leaders, typically followed a Leader-Follower leadership style, or “obedience to orders.”  This meant that any order given was obeyed without question – for the purpose of the mission, for the safety of all in involved, and for the sake of simply maintaining discipline.  Under this system, workers are influenced to comply, rather than to think.

Within his first month on board the Santa Fe, Marquet quickly realized the fault in the Leader-Follower model.  Marquet was running a drill to simulate a fault with the reactor.  In this scenario, propulsion is shifted from the main engines to a smaller, electric propulsion motor.  Marquet ordered, “Ahead two-thirds,” upon which the Officer of the Deck repeated the order verbatim.  When nothing happened, Captain Marquet noticed an unsettled look on the face of the helmsman who was in charge of executing the order.  When asked what the problem was, the helmsman pointed out that this particular submarine had no “two-thirds” in the electric-propulsion model.  Marquet then questioned the Officer of the Deck, who admitted to repeating the order “because you told us to,” although he inherently knew it was wrong.  Marquet then realized that the collective intelligence, experience, will, and innovation of 134 crew members was surpassed by the “title” of one man; the Leader-Follower model was limiting everyone’s potential, resulting in inefficiencies, low morale, and high turnover.

From then on, Marquet chose to implement a Leader-Leader model.  Instead of one captain giving orders to 134 men, there were now 135 independent, energetic, emotionally-committed and engaged men thinking about what needed to be done and finding ways to do it right. This turned all men into active leaders as opposed to passive followers. After implementing this Intent-based Leadership model, he saw results immediately!  And, a year later, the inspection team gave the Santa Fe the highest grade they had ever given.

Imagine leading a team of smart, capable, confident decision makers.  A team who is engaged, challenging the status quo and contributing immense value at every turn.  A team of self-starters who all clearly understand the mission and will take the best steps to achieve it.  How would if feel to lead a team with a strong growth mindset, who learn from their mistakes and get stronger each day?

Are you leading your team in a manner that results in followers who do what they’re told, without question?  Or are you leading leaders?  Do you empower your team to make decisions, provide solutions and make mistakes?  If not, this book will uncover why the Leader-Leader approach will help you and your team soar to new heights.

The answers to these questions will uncover a goldmine of information for any leader.  Clearly, this sparked the move in the right direction for the USS Santa Fe.  However, these questions can be asked of any leader, in any organization, at any level.  A leader who is courageous enough to admit that he or she is not the smartest one in the room and who unleashes this power in his or her people will reap the benefits of an inspired, innovative, high-performing team. These leaders will create an environment for thinking and truly have the power to “turn the ship around.” 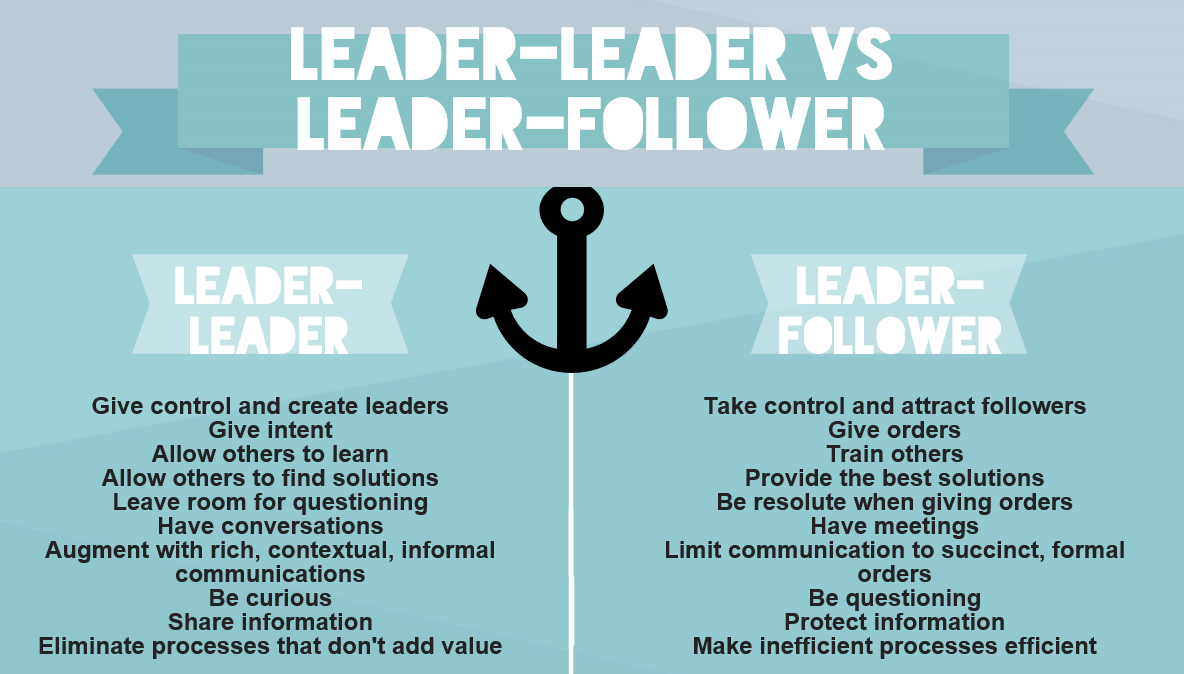 Liked This? Read More From Our Blog!